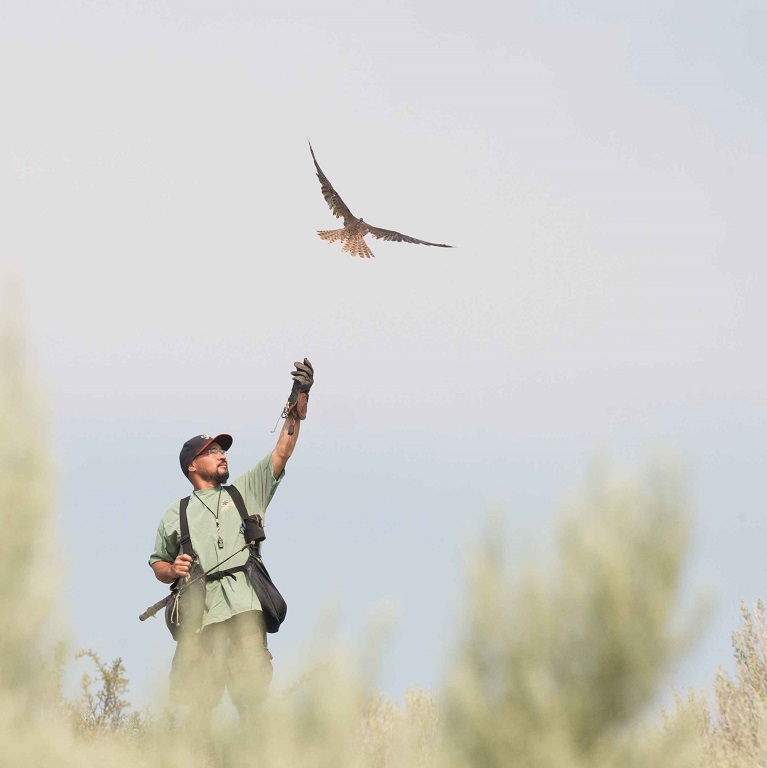 How do you control pests on an organic farm when you can’t use any harsh chemicals or synthetic pesticides?

At Trout Lake East, part of the certified organic Nutrilite™ farm in Washington where they grow botanicals for Nutrilite supplements, farmers look to a natural form of pest control: a Red-Naped Shaheen falcon.

“This is Copper, he’s a Nutrilite falcon,” explained Kort Clayton, manager of the falconry program for the Nutrilite farm, with the predator perched on his hand. “Our job is to protect the crop.”

Copper and his team of other falcons soar, swoop and dive over the acres of organic crops to scare away pest birds as part of the Nutrilite sustainable farming operation. Nutrilite is also the only global vitamin and dietary supplement brand to grow, harvest and process plants on its own certified organic farms.*

“It’s one of the only supplement companies that uses falconry to control pest birds on their property,” Kort said. “(Copper) is a fierce little predator and he’s immensely intimidating to pest birds, but he’s an absolute sweetheart.”

With thousands of acres to protect, there is a rotation of five or six falcons watching over crops early in the morning and late at night at harvest time, when the plants are the most vulnerable to damage by pest birds.

The team includes the “bomber,” who looms high over the crops as an impending threat, the “sweeper,” who zips around the farm at ground-level frightening the pest birds, and the “ace,” who rides inconspicuously inside the falconer’s pickup and then launches out the window to engage birds and chase them off the farm.

Falconry has a number of advantages over conventional bird control techniques, such as cannons or other noise-producing methods: It’s natural, it doesn’t harm the pest birds and it’s neighbor-friendly.

“Falconry takes advantage of the natural profile of a raptor in flight,” Kort said. “Falcons are natural predators of birds and they look different in flight than a hawk does. To a pest bird, they’re very intimidating.”

And while they are natural predators, they don’t harm the pest birds. “They pursue them and chase them,” Kort said. “But we’re not killing pest birds on the property. We’re just intimidating them and scaring them.”

And lastly, flying falcons are much more pleasant than large visual deterrents or loud noises like propane cannons that are often used to scare away pests.

“It’s very neighbor-friendly,” Kort said. “We’re out here flying these birds around quietly. They climb up over the farm and they soar over the fields and they create this cone of deterrence that every pest bird for miles is tuned into and aware of.

“It’s that chronic predatory presence that keeps the pest birds chased away from the farm during that crucial window when a crop is vulnerable to damage from the birds.”

Trout Lake Farm, which has an East and West location, is one of the three certified organic Nutrilite farms growing botanicals used to make ingredients for Nutrilite and Artistry™ products. The other farms are in Mexico and Brazil.